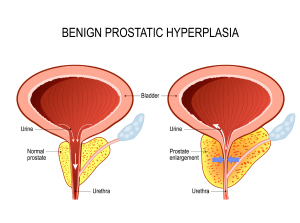 Men with benign prostatic hypertrophy (BPH) - an enlarged prostate - may eventually have a new treatment option.

Scientists are studying a method called “aquablation,” which uses a waterjet to remove excess prostate tissue.

Recent clinical trials that compare the method with the “gold standard” transurethral resection of the prostate (TURP) have had encouraging results, according to research presented at the Sexual Medicine Society of North America’s Fall Scientific Meeting, held in November 2017.

Enlarged prostate is a common condition, especially in older men, and it often leads to urinary problems. That’s because part of the urethra, the tube that carries urine out of the body, is surrounded by prostate tissue. Because the prostate tissue grows inward, it can squeeze the urethra, making it difficult for a man to urinate.

During a TURP procedure, a surgeon trims excess prostate tissue with an instrument called a resectoscope. Aquablation trims tissue too, but with a robotically-controlled high-pressure waterjet. Surgeons use ultrasound images on a computer monitor to map progress and make adjustments.

About two-thirds of men have some degree of sexual dysfunction after TURP, especially problems with ejaculation. In the trial, scientists wanted to know whether aquablation would have better sexual outcomes.

The study involved 181 men between the ages of 45 and 80. Both procedures appeared to have similar results for urinary symptoms.

For sexual symptoms, men treated with aquablation tended to have better ejaculatory function than those who underwent TURP.

Aquablation is still considered experimental, however. More research is needed before it can be recommended as a treatment for enlarged prostate.

“Transurethral resection of the prostate (TURP)”

No title - Video describing AquaBeam aquablation treatment that was used in the trial.