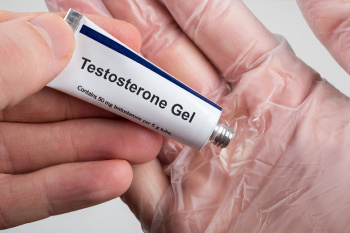 Testosterone injections are associated with a higher risk of cardiovascular events when compared to patches and gels, according to a May report in JAMA Internal Medicine.

The hormone is important for men, as it drives many of their secondary sex characteristics, like facial hair, a deeper voice, and increased muscle mass. It’s also involved with a man’s libido.

Sometimes, men’s bodies can’t produce adequate amounts of testosterone on their own because of problems with their testes or pituitary gland. Testosterone replacement therapy can help restore hormonal levels.

Doctors may also prescribe testosterone to help with the normal hormonal declines that occur as men age. These decreases can cause low energy, depressed mood, and reduced sex drive.

There have been some concerns about the safety of testosterone therapy, however. Some studies have shown an increased risk of heart attack and stroke for men taking testosterone. Other researchers have found that this is not true.

A team of American and Swiss scientists wondered how the form of dosage – injection, gel, or patch – might play a role in this potential risk.

Testosterone injections, gels, and patches are three of the most common ways to take the hormone. Injections may be given in a doctor’s office or by the patient at home. Gels and patches may be applied directly to the skin, usually on the shoulder or upper arm.

The three methods provide sufficient amounts of testosterone. However, injections cause testosterone levels to spike and then gradually decrease. Gels and patches administer testosterone more evenly.

The researchers analyzed health records of 544,115 men in the United States and United Kingdom. All of the men had been on testosterone replacement therapy at some point. Approximately 37% used injections. Seven percent used patches and 56% used gels. Generally, the men were over 50 years old, although one group of U.S. Medicare recipients were in their 70s, on average. The men had not used testosterone for at least 180 days before the study began.

Next, the scientists looked at the men’s medical records for the next year to find out how frequently they had cardiovascular events, like heart attack or stroke. They also compared hospitalization and death rates by dosage type.

This does not mean that taking testosterone by injection causes these events. Also, the study had some limitations. For example, data on smoking status and body mass index were unavailable for some of the American men. These two factors can affect cardiovascular risk. And it was unclear whether the men were taking testosterone exactly as prescribed.

Still, the results could spur further research on the safety of testosterone. Investigating testosterone in longer-term studies could be helpful, the study authors explained.