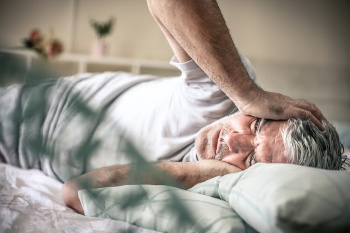 Techniques that stretch the penis could be effective for treating Peyronie’s disease, according to a review of medical literature.

Peyronie’s disease occurs when scarring develops just below the skin of the penis. These areas form hardened plaques that limit flexibility. As a result, the penis bends. Sometimes, the curve is so severe that intercourse becomes extremely difficult or even impossible. Men may experience pain, penile shortening, and erectile dysfunction (ED).

There are two phases of Peyronie’s disease. First is the acute phase, when plaques form and the penis starts to bend. Erections may become painful. The chronic phase follows. At this point, the plaques and curve become stable and don’t typically worsen. Pain usually subsides during the chronic phase as well.

Treatment for Peyronie’s disease might include oral medications, injections of medicine directly into the plaques, and surgery. However, stretching therapies might be worth considering, scientists report.

They analyzed medical studies that focused on two stretching approaches:

The study authors looked at research on traction therapy alone and in conjunction with other Peyronie’s treatments, like injections and surgery.

“[Penile traction therapy] has been successful in primary penile lengthening and curvature correction in the acute phase of [Peyronie’s disease],” they concluded. It might also help preserve penile length in men who undergo surgery. More research is needed on traction therapy combined with injections, however.

Traction devices are easy to find and use, the authors noted. But they may not be appropriate for all patients, and it is still not clear how long the devices should be used for best results. More study is recommended before traction therapy can be considered a “standard of care,” the researchers explained.

Less is known about VEDs to treat Peyronie’s disease. Studies of the approach after radical prostatectomy (surgical removal of the prostate gland) and before penile implant procedures suggest that VEDs may be effective, but further research is necessary.

“More basic and clinical research is required to clarify the role of penile stretching in [Peyronie’s disease], but with existing trials and research ongoing, the potential is encouraging,” the authors wrote.

The study was published online in Sexual Medicine Reviews in January 2019 as an article in press.

“Penile Stretching as a Treatment for Peyronie’s Disease: A Review”

“What is Peyronie’s Disease?”